Raw material and transport prices are on the rise: What has happened on the market recently?

You have probably already noticed: In the last couple of months, many leading scaffolding manufacturers as well as other providers of construction materials had to increase the prices of their products. The reason given: the soaring prices of raw materials. Indeed, the sharp rise in raw material prices has been the subject of much discussion recently. Affected by this are, among others, resources that are essential for scaffolding: steel and wood. But a lot has also changed in terms of transport costs. We want to explain to you what exactly has happened on the market recently and how the prices for steel, wood, and transport have developed.

How is the situation for raw material in general?

When it comes to commodity shortages, the Covid 19 pandemic is not letting us go. In early 2020, prices for a wide range of commodities experienced a rapid drop. Production in many sectors had to be temporarily shut down, causing commodity production and prices to plummet by around 22 percent. However, a recovery in prices became visible as early as mid-2020 - more than that: prices for industrial raw materials rose and reached an all-time high in May 2021. This also affected materials important to the scaffolding industry such as steel and wood. At the same time, scaffolding is needed more than ever, because the construction industry experiences a real boom during the pandemic. Raw materials are more sought-after than ever, which means that production facilities are working at full capacity to meet the demand. However, as this could not happen fast enough, prices for building materials kept rising in the last couple of months. You can find out why the production of raw materials cannot keep up with the rising demand here.

Prices for lumber peak at 700 USD per cubic meter

Maybe you had a look at wood prices in May. If so, you probably startled for a moment: a cubic metre of wood cost up to 700 USD on the world market. For comparison: In June 2019, when there was still no talk of a pandemic and lockdown, the price of lumber was around 133 USD per cubic metre. There was no trace of the strong fluctuations that are currently taking place. Prices then rose to around 191 USD per cubic metre in February, but fell back to below June 2019 levels with the global lockdown measures in April. The first rapid price increase then began in May, taking the price level up to 400 USD per cubic metre of wood by September, before dropping to 232 USD in the middle of the same month. Although this was still a comparatively high price for the once cheap lumber, it provided hope for buyers. However, this slight easing of prices did not last long, because after the prices had already been subject to medium fluctuations until December, they rose steadily at the end of 2020. Stronger dips, but never reaching 2019 levels, did occur, but by May 2021 lumber prices had climbed to a new 10-year high. Nearly 700 USD per cubic metre of timber crossed the table on peak days. The good news is that prices have been falling again since then. Although they are still at 323 USD, the signs are finally pointing to a gradual easing of the situation. 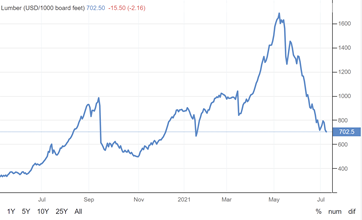 Lumber price developments in USD per 1000 board feet (source: https://tradingeconomics.com/commodity/lumber)

Obviously, wood is still an important resource in scaffolding. But scaffolding today is made primarily of one material: steel. To produce steel, two major components are needed: iron ore and scrap metal. So, if you want to know something about the price of steel, you should also take a look at iron ore and scrap metal prices. Before 2020, both were comparably cheap. Until mid-2020, you could get a tonne of iron ore for less than 100 USD, a ton of steel scrap for about 260 USD. The final product, steel, was correspondingly cheap. For example, a tonne of steel rebar was still trading for 425 USD in mid-2020.

The turning point came again in the second half of 2020: The prices for iron ore were still subject to normal fluctuations, but at the same time they rose more and more and peaked at 229 USD per tonne in May 2021. The reason for this sharp price increase is that, for example, the demand of China's steel production, which has grown strongly in recent years, was higher than iron ore could be mined. This is because many of the large mines in South America that were closed due to the pandemic can only slowly start operating again. In particular, the Brazilian company Vale, one of the world's largest suppliers of iron ore, reported problems in keeping up with the high demand. Since then, there have been repeated price collapses, but they have not fallen below the 100 USD mark again. Today, iron ore costs more than twice as much today as it did at the beginning of 2020. The situation is similar for steel scrap prices. At their peak in May 2021, prices for scrap metal had doubled compared to the previous year as well. This is due to a shortage of steel scrap. The slump in the automotive industry in 2020 led to fewer cars being scrapped, thus eliminating a major supplier of scrap. The construction projects that were stopped at the beginning of the crisis also had an impact on the declining quantities of scrap. However, once the global construction industry ramped up again, it needed a lot of steel. As scrap and iron ore became scarce resources, delays and price increases also occurred in the growing steel production. This can be seen in the rising prices of both materials from November 2020 onwards. Fortunately, the prices for iron ore and scrap metal are currently falling again - and so is the price of steel. The price for a tonne of steel rebar, for example, is currently at 736 USD.

Besides the increased prices for raw materials, there is another reason why the purchase of scaffolding is currently more expensive. And that reason is transport. Here, too, there were considerable price increases over the last year. Again, you may have heard about the increased prices here. The good news is that this is because world trade is currently booming. Of course, this also leads to an increased demand for transports - especially for container transports by sea. And the material for scaffolding is also primarily transported from A to B by ship. Now that the Chinese economy has recovered faster than expected from the Covid 19 crisis, transport capacities are increasingly shifting there. In particular, the online trade that picked up during the pandemic resulted in an increased demand for goods transport from Asia.

So, it certainly doesn't surprise you that transports by sea from Asia to Europe or North America in particular became more expensive and the prices for container transports even tripled at the end of 2020. At this time, European and American companies that had to empty their warehouses at the beginning of the pandemic also began to restock them. A shortage of transport capacities and thus an increase in prices were the result.  When the container ship Ever Given got stuck in the Suez Canal in March 2021 - just when prices were stabilising again - freight costs started to increase again.

According to Drewry's World Container Index, a container transport from Shanghai to Los Angeles still cost around 2000 USD per 40-foot container in June 2020 - and was thus already 500 USD more expensive than in the previous year. Currently, the price is a whopping 9600 USD. Almost cheap, if you consider that shipping from Shanghai to Rotterdam currently costs a quick 12800 USD. So, when steel for scaffolding is currently ordered from China, one of the largest steel producers in the world, not only is the material itself more expensive than usual, but also its route to the scaffolding manufacturer. On the other hand, transport from Europe or North America to Asia is more expensive than last year at 1320 or 1740 USD per 40-foot container, but still comparatively cheap due to the rapidly recovering Chinese economy. But don't worry: the situation will calm down again! Although experts do not expect a return to normal levels within the next year, prices are unlikely to stay as high as they are at present. The world's largest shipping companies, such as Hapag-Lloyd, CMA CMG, or Evergreen, have already ordered new container vessels to set sail in 2023 to meet the increased demand.

As you can see, a lot has happened in terms of price development for scaffold manufacturers and customers in the last year. If you want to know more about the reasons behind these developments, just click here and read our blog post on the background of the current price increases.

The entire Scafom-rux Team is dedicated to support you with all your enquiries. Reach out to us by clicking on the button below and let us know how we can help you.